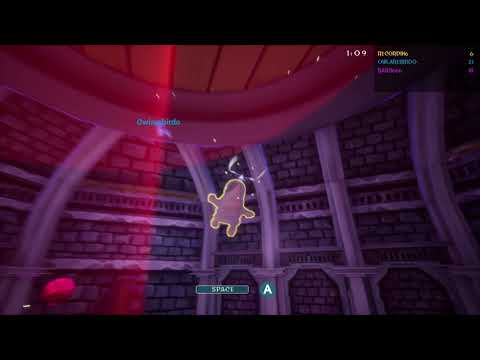 Hit us up to get a Steam Beta Key!

Satanic Bird Cult - Revenge Of The Birds is an online multiplayer video game developed in the Unreal Engine.
It's a gaming experience in a competitive game mode setup for up to four players. The arena of the main game comprises a closed virtual space shaped like a church. A satanic statue appears on the ground in the middle, which is surrounded by NPC cultists.
The aim of the game is to generate points for yourself in a given playing time. Points are collected by players picking up, carrying and dropping the cultists with their controllable birds. Points are generated when players drop their cultists onto the satan figure in the middle. Furthermore, dropped cultists can be caught by other players during the fall, allowing them to drop the cultist again. This increases the value of the cultists and thus also the points gained for the player who last successfully dropped the cultist on the Satan statue. At the end of the game, the player with the most points wins.
The flight speed can be increased by flying towards the ground.
The Satan statue shoots energy balls, which produce a negative effect when they come into contact with the player's bird avatars. This negative effect includes dropping currently carried cultists and briefly losing control of the bird you are playing as. The same effects are also triggered when two players collide with their avatars, although these negative effects only apply to the slower of the two avatars.

The how and why

Satanic Bird Cult - Revenge of the Birds is a MMP3 project for most of us and the sequel to a 2D game made during the course of the MMP2A project a year earlier. The bird cult expanded its team and gained talented artists and programmers. The aim is to design a project through which we can look back on our bachelor's degree with pleasure. In doing so, we discarded already implemented game ideas and went in search of a game idea that, above all, was fun for us. However, discarding implemented game features and prototyping is common practice in the gaming industry, which certainly has set us up well for the world out there. With the construction of a competitive 3D online video game with Steam integration, our knowledge grew and let us grow some gray hairs.