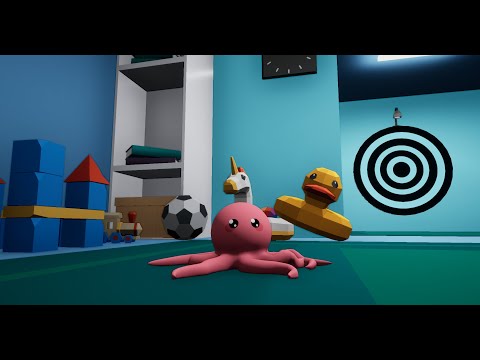 Octarina is a physics-based 3D puzzle platformer featuring a trapped little octopus who must find a way out and escape out of a sushi factory site. You play as an adorable little octopus, which is trapped inside an aquarium for its whole life. Not as a pet, but rather as a sushi ingredient. Escape your captivity and find a way out before it's too late! Use the sticky abilities of Octarina to jump, climb and cause mayhem in the factory. Discover your way to regain freedom! Key Gameplay: You'll have to find a way to escape your current situation. Octarina has the ability to stick to its environment and objects. You explore the factory and try to open up new ways. To do that you climb up walls, push buttons and throw around various things to work your way through the factory to escape. There are many dangers but also secrets in the level which will challenge your finesse. Different Gamemodes: Additionally to its main storyline, Octarina contains two other challenging gamemodes so far. Firstly, in the “Checkpoint Race” gamemode the octopus has to navigate through the factory and reach different checkpoints within a certain timeframe. The second gamemode is “The Floor is Lava”, a gamemode in which Octarina is threatened by rising lava and the objective is to reach the goal on higher ground. Look & Feel: Octarina uses a simplistic set of pastel colors (mainly blue and pink variants) in combination with a smooth shading and character outline. It radiates a cute and friendly vibe. The control of the octopus is supposed to feel a bit wonky, but not out of control, like "I am Bread" or "Octodad". Technical: The game character is a highly versatile ragdoll octopus which is able to stick to the environment and to objects with each of its tentacles. With these abilities Octarina is able to throw around objects and travers the levels in a completely new way. Therefore, the levels are designed to feature high interactability and a lot of destructible objects. Further, puzzles are designed to be solved in many different ways and feature hidden secrets to encourage you to replay the levels.

Technical information: The game was made using Unreal Engine 4. Playtesting: If you want to test and give feedback to this game, you can download the game via the itch.io link.