Sophia is bored. Her sketch book is full of math and programming notes (which has nothing to do with her boredom). She only has one blank page left, and decides to be creative and draw whatever she can think of. It resembles a ball of slime, sticking to drawn pencils. The background is filled with flowers and trees.

You can decide – should she draw a boy slimeball or a girl slimeball?

The whole world is moving from the right to the left. Around your chosen slimeball rotates an arrow, but Sophia imagines this arrow as a colourful pencil, so guess what: your arrow is now a colourful pencil. If you hit the space bar, your slimeball will shoot in the current direction of the arrow. You can stick only to pencils, which are spawned with length and distance to their preceding pencil, just as Sophia wants.

Where exactly your arrow begins and ends to rotate depends on your position: do you stick to a corner, a straight side, or the top of a pencil? Your arrow always rotates 180 degrees before it changes direction.

Each Grow and Shrink power up increases/decreases your radius by a factor of 0.3 of your original radius, to a maximum of 1.6 and a minimum of 0.4. The Pause power up stops the world movement, but not your movement. While the world is paused, you can go to a better position, collect a few points, or even more power ups. So the Pause power up is worth aiming for, even if it means going to the more dangerous, soon vanishing left side.

Personal tip from me: you want to be rather large than small.

Every 20 seconds, Sophia realises, that her lecture will be over soon, so she speeds up her drawing speed, which includes world and slimeball movement, and rotate speed of your arrow. You get the amount of points of your just finished speed level added to your score.

In order to get a high score, you generally want to pick up good score points (yellow) and avoid bad ones (red), and of course: stay on the page, so Sophia can draw you as long as possible!

Have fun and: Be sublime, climb with slime! 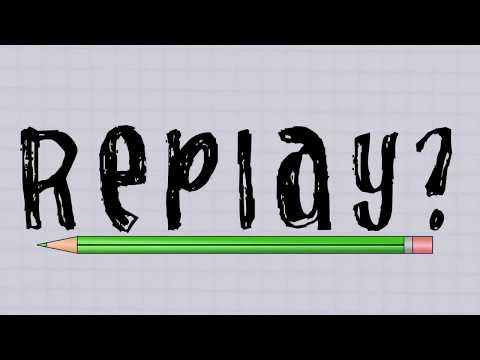 You can collect good and bad score points.

Collect as many (good) points as possible and live as long as you can!